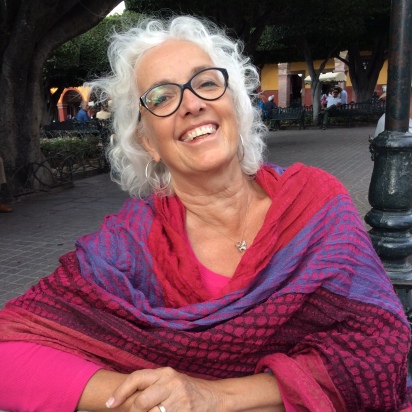 I met Merilyn Simonds on a sunny June day in Toronto to discuss what she might write for Canadian Writers Abroad. Happily we agreed on the importance of reading the writers of the place that you find yourself in — for her, Mexico.
— DM

Travelling beyond the borders of my home country, I can see history in museums and architecture, get to know contemporary culture in markets, parks, streetscapes, restaurants, and galleries. But even after living part-time in Mexico for several years, my Spanish is still too rudimentary for little more than a kindergarten-level conversation. To get to know how Mexicans think and feel, I have to read their books.

I started with Artes in Mexico, a glossy folio magazine that focuses each issue on a particular subject — mescal, tiles, la Fortuna. Articles are drawn from history, science, technology, film, literature, and visual art and are published in both Spanish and English. My progress was slow. Too slow. I longed for novels, for poetry.

At La Biblioteca, I found Mexican Writers on Writing, part of a series called The Writer’s World. In its pages, I discovered a more complex Mexico. The book opens with brief excerpts from Bartolomé de las Casas, the first to use writing as a weapon against the oppression and injustice of the “conquistadores,” whose shadow falls darkly over five centuries of Mexican history. He wrote to provoke social change, an impulse that runs through Mexican literature, from Sor Juana Inés de la Cruz, the poet-nun of the 17th century, through José Joaquí Fernández de Lizardi’s The Itching Parrot, Juan Rulfo’s Pedro Páramo, Rosario Castellanos’s Book of Lamentations, Elena Poinatowska’s Las Soldaderas and Nothing, Nobody, and the novels of Pedro Ángel Palou, Jorge Volpi and the other signatories of the Crack Manifesto, which promoted “profound” novels that took aesthetic and formal risks.

Through Elena Poniatowska, I learned of Nelly Campobello, who wrote two books in the 1930s — Cartucho and My Mother’s Hands — brilliant fictional memoirs of a 10-year-old girl living through the 1910 Mexican Revolution. I’d been reading Carlos Fuentes and Octavio Paz since university, but I returned to them now, alert to a different conversation, one rooted in the dry desert, endless oppression punctuated with bursts of joy. I kept my eye open for new Mexican writers, like Yuri Herrera (Signs Preceding the End of the World), Valeria Luiselli (The Story of my Teeth) and her husband, Álvaro Enrigue (Sudden Death).

I read these writers in English. Many are translated by the brilliant Christina MacSweeney, who captures the distinct flavour of Mexican Spanish, but even so, reading a translation feels to me like conducting a conversation through a screen. And so I struggled through Cartucho in the original Spanish, then Pedro Páramo. Next year, Las Soldaderas. I won’t feel I can truly know this place until the words of its writers can travel from their imaginations through their pens and my eyes directly into the deepest recesses of my mind.

This reading is shifting what I write about. My new novel Refuge takes place partly in Mexico and explores the notion of migration, both intentional (as my annual migration is) and the forced asylum-seeking of the stateless and the displaced. My work-in-progress, Then, is set entirely in Mexico during the time of the Zapatista revolution, the most recent conflict in a history replete with armed struggle.

My reading is changing how I write, too. These Mexican writers give me courage. “Crack novels are born not of certainty, mother of all creative annihilation, but rather of doubt, elder sister of knowledge,” declares the Manifesto. “Crack novels run all risks.”

I’ve taken to heart the Manifesto’s call for writing that embraces the multiplicity of life, that reflects in its language and form both exactitude and intensity. Especially intensity, for that is Mexico I’ve come to know: a place of contradiction that ricochets from laughter to sorrow until one hardly knows which is which.

Merilyn Simonds divides her time between Kingston, Canada, and San Miguel de Allende, Mexico. She has published 18 books internationally, including The Holding, which was a New York Times Book Review Editors’ Choice, and the Canadian nonfiction novel, The Convict Lover, a finalist for the Governor General’s Award. In 2017, Bookmark Canada unveiled a plaque to honour the place of The Convict Lover in Canada’s literary landscape. A former adjunct professor in the University of British Columbia Creative Writing MFA program, she mentors emerging writers across North America.
Her latest novel, Refuge, is published this month with ECW Press, and will be reviewed here next week.