Let’s say you swallow the pretentiousness of the title, with its peaks and important meetings of world leaders, all contained in that word “summit” in the Canadian Writers Summit, held at Harbourfront in Toronto 14-17 June 2018. Let’s say you peruse the programme, wondering if this summit is for the important writers, the mid-career writers, the writers who still have something to learn? As the writer who has been away for some time, the issues in the programme don’t seem important to you — all the more reason to go. Time to get caught up. 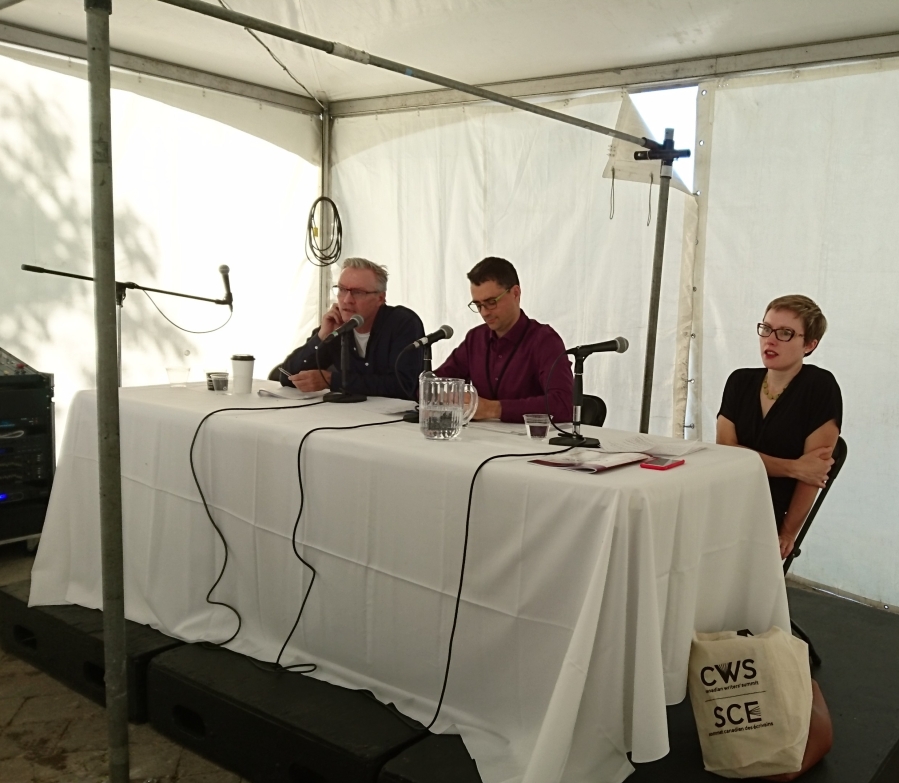 From the very first panel discussion that you attend, the dichotomy becomes apparent. The panelists are the metaphorical heads of state, and the audience are the writers who still feel they have something to learn. So on Friday morning in Market Tent A, “Fiction as Research” turned out to be a presentation of three papers about research: Siobhan Phillip talking articulately about writing in the genre of researchers as protagonists of fiction, Michael Helm, editor of Brick, on the necessity of research and how field research led him to such questions as: “Is a novel apart from or a part of the world?” His point made another way: “Reality had begun to overwhelm my literary uses of it.” Moderator Robert McGill talked about the types of research that fiction does best. His paper was easier to take in for those sitting in the warm spider-infested tent, broken up as it was by lists. Here’s one:

At the end of the important discussion, the inevitable question came. Could you address the use of research for fiction? In other words, the audience wants to know: how much research do I need to do for my novel? Tell me how you know when to stop researching,  how much primary and secondary material to use. Do I really have to do interviews (Answer, clear from Michael Helm’s talk, is yes)? But that is a craft question, and this was a summit.

“Why I Write” with Alissa York, David Bezmozgis, and Shyam Selvadurai

It might seem a moot point for a writer to go to a discussion called “Why I Write,” but you love the work of George Orwell, and the subtitle is: “From Orwell to Today.” This panel has the big names: David Bezmozgis, Shyam Selvadurai, Alissa York, and it is addressing a very relevant issue: “If we accept that we are again living in particularly turbulent political times, how is this reflected in our prose writing?” (Sorry, poets.) So you go. And you find out that your little expat cocoon or war zone really has been out of touch, because David Bezmogis tells us that “something is in the air even in Canada,” that “writers who’ve not been affected by turbulent times have suddenly had an awakening” and now feel they can’t indulge the luxury of ignoring larger issues. Shyam Selvadurai says “we are slipping towards fascism” and while Canada is not there yet, individual Canadians are living their own turbulent times. Alissa York counters Orwell’s statement that no writing is not political with “All writing is writing about the daily.” Although she began with the Anthropocene era that humans have created, she ended with “I have a big problem with women not being at the centre of their own lives.” Everyone enjoyed the readings from their work.

Time for lunch. Are you allowed to talk about lunch when you are at something as important as a summit? I suspect that the lunch at the G7 summit was better than the sandwiches and mayonnaisey salads on offer to Canada’s writers.

After lunch, time for a little stimulating anger. You find Market Tent D for “Writing the Land” with Catherine Bush, Alicia Elliott, Sheniz Janmohamed, and Shani Mootoo. Hmm. Does that say something, an all-female panel discussing their interaction with this land that they occupy? How is it for three of the panelists to sit beside Tuscarora writer Alicia Elliott (prize-winning essay: “A Mind Spread Out on the Ground”), talking about their relationship with the land — when they have migrated to the land of Elliott’s ancestors? While Sheniz Janmohamed talks about colonial history with anger in her voice, you suddenly think of Israel. Often you have wondered about the existential angst, the malfoi, of Israelis living on land they have taken from someone else — yet when you were growing up in Canada, you never gave a thought to who lived there before the farmer sold his field off in lots. And that is what Catherine Bush encourages you to do — to think of the land 500, 2,000, or 10,000 years ago. Shani Mootoo has set herself the task of being responsible to the integrity of her art while being mindful of the land. Is mindfulness enough? Is it right to ask, “What does it mean to be an ancestor in training” when Elliott has spoken of being cut off from her ancestors, the people of this land?

A coffee interlude. A meal break. Some readings in Miss Lou’s Room in the Harbourfront Centre. Cherie Dimaline, reading from The Marrow Thieves. Lillian Allen doing dub and not dub, among others.

Saving the best for last, the keynote speech, Cree author Tomson Highway gave the Margaret Laurence lecture on a writer’s life. Highway was fast and funny, and he began by saying that Margaret Laurence saved his life. With many amusing digressions, he talked about his university years in Manitoba and reading the greats of literature only to find it had no connection to him. He discovered the work of Laurence, who wrote about the prairie land and its occupants with her large heart. Then he saw that literature could come from this land, this place, his people — from him. As it has. His latest book is about the early days of Native literature.

And you leave the large hall thinking that yes, you have seen the summit of Canadian literature, the best of the best, its top thinkers and writers who have sent down to we lesser beings the lightning bolts of ideas. 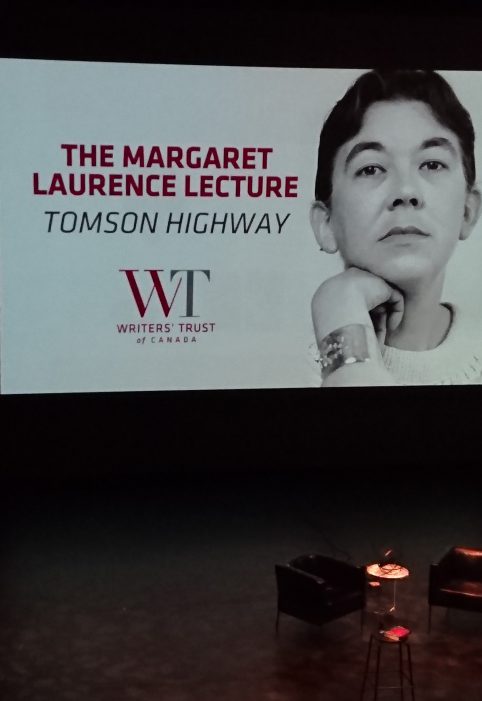 Sorry, the photographer was seated in the gods and couldn’t get a decent photo of Tomson Highway.

The summit was organized by The Writers Union of Canada, Union des écrivains et des écrivains Québécois, the Canadian Authors Association, the League of Canadian Poets, the Playwrights Guild of Canada, CANSCAIP, the National Reading Campaign, the Toronto International Festival of Authors, Writers’ Trust of Canada, the Book and Periodical Council, and the folks who teach Creative Writing (CCWWP).