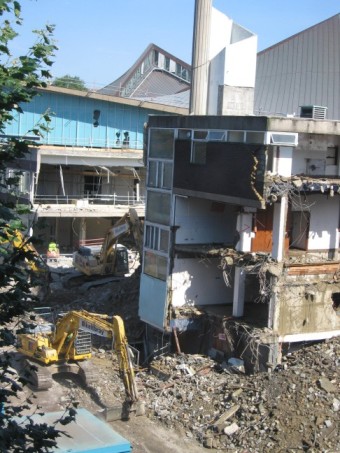 I have been thinking about Sara Jeanette Duncan lately. I should be thinking about her work, but I’ve been thinking about her. OK, when I cough (a lingering cold), I think about her. Because here’s the thing. I have it easy compared to her life in London. If I sometimes find it tough to keep up with the dog on the walk to Kensington Gardens, how did Duncan find it, walking from Paulton’s Square? For a while she lived quite close to Kensington Gardens, but in her last years in London she lived closer to the river. How did she get from the square down there to the park up here? Did she bother or did she rather sit in her little square? What I love about Kensington Gardens is the wind, the feeling that you are breathing fresh air despite the traffic bordering the park top and bottom.

Here’s a picture of what’s been going on next door and why I was seeking fresher air. Was Duncan able to seek this freshening feeling, did she take a bus, did she walk, was she able to walk that far with her tuberculosis or mystery respiratory ailment imported from India? I suppose I should buy a biography of her life, but I rather enjoy walking around London wondering if she coughed here or panted there. Is that weird? The walk from the King’s Road to Kensington Gardens would be about 45 minutes today, on clean sidewalks beside automobile traffic. Transport for London confirms it is a 41 minute walk.

In Duncan’s day, she would have walked through air thick with smoke from people’s coal fires, on dirty streets  in damp leather shoes with frayed laces. Who knows how long it took to walk that distance? Walking beside other people with TB, coughing. Then again, if you could read while walking, as in this photo from a decade earlier….

On Kensington Church Street 1906, (not SJD), from Dave Walker’s blog

I haven’t found a quick statistic on how many Londoners had TB back then, but I did find this:

In 1911 the National Insurance Act encouraged a state-led campaign against tuberculosis, allowing sufferers who had insurance to be treated in sanatoria. … The Metropolitan Asylums Board was finally empowered to care for uninsured tuberculosis patients in 1913 under the Public Health (Prevention and Treatment of Diseases) Act. … The London Open Air Sanatorium was opened in 1901 by the National Association for the Prevention of Tuberculosis. When the Metropolitan Asylums Board bought the institution in 1919, they renamed it Pinewood Sanatorium, providing 160 beds for adult patients. The hospital was situated in 82 acres of pine forest near Wokingham in Berkshire. Pine trees were believed to be beneficial for sufferers of tuberculosis and three exercise tracks were marked out through the woods. –City of London Archivist Katharine Short, “Pinewood Sanatorium”

According to Katharine Short, Canadian soldiers were treated at Pinewood during the Second World War. The hospital was closed in 1966, when it was used for, among other things, television studios. (Not, apparently, Pinewood Studios, which has been operating from Heatherden Hall in Buckinghamshire since 1934).

So the question is: was Mrs Everard Cotes insured? But wait — she was cured of her TB in Simla, India. Here she is in her mild plaint at being forced to sit all day in her Simla garden:

“And Tiglath-Pileser has come, and has quoted certain documents, and has used gentle propulsive force, and behold, because I am a person whose contumacy cannot endure, the door is shut and I am on the outside, disconsolate. … I am only banished to the garden. … My eye, which is a captious organ, is to find its entertainment all day long in bushes – and grass. All day long. … From morning until night I am to sit for several months and breathe, with the grass and the bushes, the beautiful pure fresh air. … In vain I have represented that microbes will agree with them no better than with me; it seems the common or house microbe is one of the things that I particularly must not have.” –The Crow’s Nest

Ah, but that garden cure would surely mean that some years later she would be drawn to Kensington Gardens?

The title of this post is the subtitle of a book I still haven’t got around to reading. It is supposed to be about writers with tuberculosis or asthma and how disease affects writing: Le souffle coupé : respirer et écrire by François-Bernard Michel (1984). Here is a nice little summary.

from Univ. Rochester “Beauty for Commerce”