The song “Home on the Range” turns up in Isabel Huggan’s essay, “Someday You’ll Be Sorry” in her award-winning collection, Belonging. The song is mentioned as one of several that Huggan’s mother chose for a party singalong. Listening to them, the young Isabel hears a trap: “these songs, to my mind, were nothing but sentimental slosh and all part of a losing campaign to convince me to be like her and to stay in Elmira forever. I preferred the lyrics to “The Whiffenpoof Song” or “On the Road to Manadaly…” (Belonging, 89).

The essay, “Someday You’ll Be Sorry,” is essentially about the beginning of Isabel Huggan’s life abroad. She is writing about why she left her home in Elmira, Ontario. After she tells her parents that she finds the farmland scenery boring, and that she is anxious to leave for “huge cities and jungles and deserts, people of different colour wearing clothes of every stripe, speaking strange languages that fall on the ear like rain,” her mother warns her: “Someday you’ll be sorry, young lady.” (Belonging 87) And this book, of belonging, of making a home for herself in another land, is her answer to her mother, while acknowledging that yes, “there’s nothing more important than family and the place where you grew up” (Belonging 87).

Of course her mother was right, and perhaps that is how we come to have The Elizabeth Stories (1984), which is set in a small town in Ontario called Garten. In the short story, “Queen Esther,” Elizabeth also is flattened by the cultivated southwestern Ontario landscape, finding that the only good thing about it is the possibility of escape.
I’d like to point out that the difference between the the fictional and memoir version of the drive through the countryside is in diction and tone. The memoir is casual, chatty, and includes two lists — one of the landscape she sees out the window, and one of the longed for scenery, and both lists use few adjectives. The story is more detailed, more observant. Compare, for example, the essay’s “rich green farmland” to the story’s “The land hums with new wheat and corn coming up green.” And in the story, “Queen Esther,” the desired landscape is given emotion with adjectives: “But I long to go to places I have seen in movies, read about, imagined; dangerous mountains, furious seacoasts, even the treeless expanse of prairie would seem open and generous after this” (ES 89-90).

Go Isabel Huggan did. In Belonging, she mentions a trip to New York City at the age of 21. A year later she was in Toronto, and a year after that, she went abroad with friends. (See Isabel Huggan London 1966.) Back in Canada, she married Bob and they moved to Belleville. Then, in 1987, they moved to Nairobi. From there to Montpellier, and from there to the Philippines. While they were living in the Philippines in the early 1990s, they bought the house that is now her home and writing retreat, Le Mas Blanc. Huggan continues to travel, mainly back and forth between France and Canada, while also making trips to the UK and to Tasmania.

Having escaped, she longs for home. When Huggan goes back, as an adult, to visit Ontario, “it is home I want, home I lust for, home I want to remember in perfect detail. … Actually, it is not that small white house I mean when I write the word home, but the subtle kinetic familiarity that comes from situating oneself in recognizable terrain, the feeling of knowing who you are” (Belonging 90). Or as she explains later, “the act of returning … is an attempt to know oneself, just as the initial departure sprang from the same source. You think it’s the landscape you want to see again, but really you’re looking for yourself” (Belonging 94).

Looking for yourself raises the eternal expat question of identity. Who are you when you are removed from all that you know and set down in a place where you have no roots? In “Hard of Happiness,” Huggan questions anxiously, “Have I become a superficial expatriate, belonging nowhere, adept at skimming the surface and avoiding the depths?” (Belonging 116-117).

The answer is most emphatically no. One has only to look at her pieces on Kenya, for example — the essay “Graceland” in Belonging and the short stories “Losing Face” and “Skin the Colour of Money” in You Never Know — to see that she dives in and struggles below the surface. In fact, her approach to her environment is the opposite of Cooper’s self-absorbed characters in White Elephant. Huggan seeks understanding, and if she fails, blames herself rather than those around her. Compassionate, considerate, it is no wonder that she has friends in every country where she has touched foot. And then some.

Although Huggan does write about her employees or her character’s servants (the white woman in both stories has no name, but the Kenyan characters do), and about poverty, her work is much more than that mocked by Binyavanga Wainaina in his essay, “How to Write About Africa.” (Granta 92). For example, she describes the chai that the narrator makes for the night guard, Noah, as “African Tea” (“Losing Face” 53). But she adds a dilemma for us: she takes the tea out to him with a sandwich. She has been advised by well-meaning expat friends not to be so generous as to feed him. Yet she does, “embarrassed by our soft-heartedness…” (“Losing Face” 54).

And then the story turns, away from a discussion of Florence, the Kikuyu housekeeper who “does things her way no matter what I say,” (57)  back to Noah and the tea. The narrator discovers that Noah keeps himself awake all night by standing and rubbing his back against the wall of the house. She cannot sleep for thinking about Noah’s vigil; she flops in the bed like a fish: “I am a fish out of water” (“Losing Face” 67). 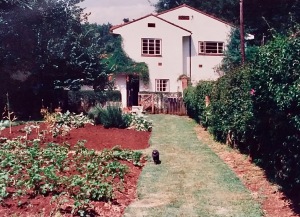 Side garden of Nairobi house

In the story, “Skin the Colour of Money,” the point of view switches from “she” to “you.” Going to Kariokor market, “you feel a little awkward and self-conscious” (“Skin” 123). The narrator, or you, are taken to the market by your friend Bertha, who delivers hard truths with a laugh. “Her laughter seems to be a signal to pay attention” (Skin 125). Bertha tells you that you can try to communicate, to “give and take and learn from each other” but it will always come down to you having money (Skin 124).

At the market you regularly visit Mercy, a wizened Kamba woman over 90 who speaks neither English nor Kiswahili, yet with whom you feel a connection. You bring her little presents and sit with her. One day you wrap up a cake that your Kikuyu housekeeper Florence has baked, and when Florence asks where you are taking it, she is furious. “You take the food I make to some old Kamba?” (Skin 135). You decide that you must be more careful in future about your gifts, that maybe Mercy would rather choose what she needs, yes, you decide, perhaps it would be wiser to giver her money. And so the story comes full circle — the prophecy of the title is fulfilled. You are memsahib shillingi or Mrs Money.

At the end of You Never Know, in “Knowing People,” a story set in Scotland, the narrator concludes: “Why we enter each other’s lives and how we are meant to fit together is more than is given us to know. And yet that’s what we want, isn’t it? That’s what we want to understand” (“Knowing” 241). The desire to understand compels you/her to sit in Kariokor market and listen to Mercy singing words that her grandson must translate, and to make small gifts in exchange.

In the opening essay of Belonging, “There Is No Word For Home,” Huggan argues that home is a thing we make for ourselves, that it is the hard work of naming and planting and getting to know the neighbours. “And so it follows that I shall learn, as I have learned in other places, to make this house home. Over time, I shall find out how to grow in and be nourished by this rocky foreign soil. I early learn the phrase je m’enracine ici, which means “I am putting down roots here,” in order to convince myself—for this time, we are not moving on” (Belonging 5).

Finally, to “chase ambivalence into the shadows,” Huggan again deploys the “you” point of view, as if giving instruction to both herself and her readers:

You go for a walk in the hills and watch a hawk unwinding on an updraft. … At night you fall into bed content that you are creating whatever it is that is chez vous. … you sleep without interruption, except for the hourly tolling of the bell at the Mairie coming clear and sweet across the fields. It always rings the hour twice, as if to ensure that its message is heard: Listen, it says. Pay attention. This is where you are. (Belonging 21-22)

And that is the essence of Huggan’s work — that she pays attention. She stands aside, she listens, she observes, and then she tolls the bell for us so that we too can understand.

“I really wanted to tell a little bit about my own life and what had happened to me and my search for home in different places,” she said [about her book Belonging]. CBC News August 19, 2016.