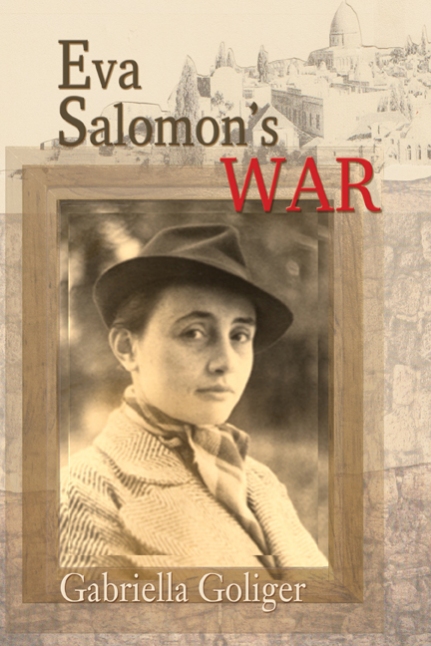 The first person narrator of this absorbing historical novel is Eva Salomon, who is writing about her life during the most important years of the 20th century: the years leading up to the Second World War, the war itself, and the years following it. Not another war novel, you say? Yes, a fresh and fascinating take on this period, partly because of its setting in what is now Israel: the Tel Aviv and Jerusalem of the British Mandate. Eva Salomon transforms from trying to be a good Jewish girl to a young woman who abandons her father and all of his criticisms for the new world being built by refugees like her family — she seeks equality and the freedom to do what one pleases. Just as her child self is disillusioned regarding the holy spirit, so her adult experiences during the war mock her idealism. She survives heartbreak and trauma not only to create a profession for herself but also to have faith:

And I do finally believe in something. Yes, I do. That if we win this war and the crisis of survival is past and we finally have our state, it will be the place of the better dream. Arab and Jew will find a way to live side by side. Peace will reign. Justice will prevail. p. 379

But I am getting ahead of myself. While this is a novel of contrasts between the restrictions of the old country (Germany) and the liberties of the new (British Mandate Palestine), between personal choice and societal expectation, and between the lives of two sisters, one of whom lives on a kibbutz, it is also a love story. A complicated love story, because the reader is always in doubt: can the plucky young woman love the oppressor in the form of Constable Duncan Rees of His Majesty’s Palestine Police, and can Duncan love her back, properly, without his prejudices getting in the way? Music brings them together. They meet in Kowalski’s record shop in Tel Aviv, where Eva is in raptures listening to a recording and he watches her enjoyment. It is not exactly love at first sight:

It is hard to imagine that during a war people went to concerts, but they did. These concert posters are from the London in Jerusalem Exhibition at the Tower of David Museum of the History of Jerusalem.

He looked fairly human without the cap and not exactly ugly despite that pair of stick-out ears. High cheekbones and a full, rosy lower lip gave him a jovial, boyish air. p. 68

The full lower lip is one half of his “rubber lips”, with which he whistles the symphony that acts like a honey trap to the young Eva. They go to concerts, for walks, swims and ice creams. They dance to jazz, she tries gin fizz, and she boldly ignores the looks cast upon their mixed couple. Her roommate and her sister try to dissuade her, her father forbids her, to no avail. Eva is in love. “Thumbelina. If anyone else had called me that, I would have smacked him in the face. Out of Duncan’s mouth, it sounded lovely.”  Their relationship is sealed not by a wedding ring but when he buys a record player for her room in Jerusalem.

And yet Duncan’s full lower lip doesn’t stay rosy. As his work shifts from suppressing an Arab revolt to dealing with the various terrorist acts of the Jewish groups fighting for independence, such as the Irgun, that lower lip becomes thrust out in concentration and eventually in anger and revulsion. After the bombing of the King David Hotel, he visits Eva who sees “his lips set and his jaw thrust forward.” While Duncan gets some of the best lines (“Jerusalem is half the size of a Dublin cemetery and twice as dead”), he also spouts some racist remarks that almost make him a stereotype. Almost, for could he be otherwise, a man of his time? In his rant against the bombers, the “vermin,” he says hanging is too good for them, “String ’em up by the feet and use their heads for footballs, is what we should do.” Eva notes a moment later, “He spat the word ‘Zionist’ out of his mouth like a shred of foul meat.” And so their relationship evolves into a representational one, where Eva speaks on behalf of the moderate Jews and Duncan embodies bitter intolerance.

Goliger has a stylistic tic — she loves a series of three. For example: “The following day saw more parties, parades, and thanksgiving services throughout the country…”; “In the rescue, in the chase, in the chaos”; and “…a small encouraging smile on his lips, suggesting competence, self-discipline, and high principles.” Compared to what she pulls off in this well-researched novel, however — the voice of a British policeman in his letters and conversation, the voice of Eva’s sister Liesel in her letters from the kibbutz, the condemnatory voice of Eva’s father, the voices of various friends and neighbours such as Malka, and Katy and Sami Khoury– this tic is nothing but an amusement.

I recommend this tale of Eva Salomon’s various departures — from the Nazis, from her Jewish father and finally from the trauma of a Jewish attack.

Disclaimer: Apparently it is a conflict of interest for a reviewer to review the work of a friend. Goliger is a friend of mine. For anyone horrified by this fact, I direct you to the work and lives of the Bloomsbury group. –DM 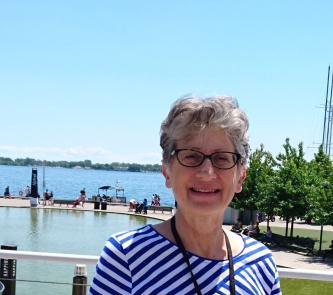 Gabriella Goliger lived in Israel in the early 1970s; since then she has made frequent trips to Israel to see family and friends, most recently in November 2016. Goliger grew up in Montreal and now makes her home in Ottawa. She has an M.A. in English Literature from Hebrew University of Jerusalem (1974). In 1997, her short story, “Maladies of the Inner Ear,” won the Journey Prize; it was republished in her collection, Song of Ascent in 2001. Her novel Girl Unwrapped (with scenes in Israel) came out in 2010.