In Vienna, she feels shadowed by history, time marching on.

-from “Fréhel Takes Her Leave” by Sarah Bernstein 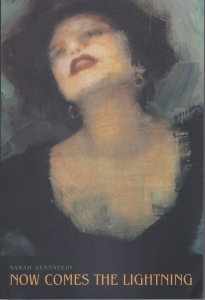 The early-mid 20th century French singer, Fréhel, is the subject of Now Comes the Lightning (Pedlar Press, 2015), a novella by native Montrealer Sarah Bernstein. In chapters made from individually titled prose poems, Bernstein gives an intimate portrait of this early twentieth century artist. Fréhel’s stage career began in the famous theatres of Montmartre in the 1910s — preceding that of Edith Piaf — and ended onscreen in the 1940s. Like Piaf, Fréhel was famous in her day for distinctive renditions of “chansons réalistes,” which relate stories of the working class and the marginalized: the poor, the criminalized, and the cast-offs.

Fréhel’s unlucky life is, sadly, perfect material for such songs. But Bernstein is after more than an exposé of what Pierre Chenal called “the accident of her life”; along with Bernstein’s research on Fréhel’s life, its erasures and evasions, she has created a meditation on femininity among women without means in the early 20th Century. Like the many demi-mondaines portrayed in Jean Rhys’s fiction, Fréhel seems to be more acted upon than actor; and yet, Bernstein’s version of Fréhel explicitly refuses to cross over into middle-class security. In the poem “Fréhel’s Class Consciousness,” Bernstein depicts Frehel’s thoughts: “She won’t be a petite bourgeoise. She will win the game.”

What the “game” might be is open to interpretation. Born Margot Boulc’h, and first taking the stage name “Pervenche” (Periwinkle), Fréhel grew up in Paris, where she endured a poor childhood. In the novel, she is sent to work at a very young age, but dreams of being a performer. In her early teens, she is discovered in a café where she has been singing for food and a place to sleep. She makes it onto the stages of Montmartre, where she is mentored by an older singer, and falls in love with several men, including the young Maurice Chevalier. Men are not reliable, however: Chevalier — portrayed as childlike with the repeated epithet of “milk teeth” — envies her success so much that he leaves “bruises the colour of softening pears on her arms and neck.” Not long after this, he abandons Fréhel for the more famous Mistinguett, 13 years his senior. On her own again, Fréhel lives mired in depression and addiction, and becomes a wanderer.

The book continues to follow Fréhel as she travels eastern Europe during the First World War, eventually returning to Paris to reclaim the stage and begin her film career. Fame had its downside: during World War II, Fréhel was one of many well-known entertainers pressed into service by the occupying Nazis to entertain German troops and POWs. Later in life she expressed regret at this collaboration, but Bernstein titles the poem about this shame, “Fréhel, Dissembling.” The book ends with Fréhel as a “sagging drunk,” unrecognizable to those who encounter her.

Stylistically, the book is reminiscent of other verse novels, particularly Anne Carson’s Autobiography of Red. While there is no magic realism or mythic grounds for Fréhel’s story, her character feels archetypal, perhaps because her life imitates the lives of many operatic heroines abandoned and betrayed by men. The book’s lyricism and understanding of Fréhel as a woman of a particular time and place kept me reading, even though at times I was frustrated by a lack of obvious narrative cues. That said, reading the book over carefully, I recognize the effort to knit together the arc of a life: while some poems are based on newspaper articles or interviews with her contemporaries, others are clearly woven from Bernstein’s strong imagination, embroidering scenes (which may or may not have occurred) with lines such as these: “The edges of the stone buildings fade against the sky, which goes on and on, clouds covering over cracks of yellow winter light.” This image captures perfectly both the emotional, and the actual, dimming of Fréhel as she enters into what one reporter called the “night” of her career.

Naomi Guttman’s latest book is the novella-in-verse, The Banquet of Donny & Ari: Scenes from the Opera, (Brick Books). Raised in Montreal, she writes, teaches, and cooks in Central NY. You can find more about her, including reviews and readings, at Naomi Guttman’s website.