People flock to Westminster Abbey to visit the Poet’s Corner, where writers are either buried or have a memorial. What is the satisfaction of these literary pilgrimmages? I too indulge in this weird pleasure. When better to visit the burial place of Sara Jeannette Duncan than at the beginning of the year that she became a Person of National Historic Significance, or, National Historic Person, as designated by the Canadian government.
Finding the grave of Sara Jeannette Duncan was not only about the expedition — the actual find — but also about the locale. My navigator and I set out with our dog on an overcast Sunday in January to find Duncan’s resting place. As we drove through the not-very-interesting streets of Ashtead looking for St Giles’ Church and its graveyard, I was distracted by things Duncan might have seen, such as the monument to Mrs Mary Greville in the photo below. Does looking at the street that Duncan walked upon, the shop that she may have visited, help me understand her work? No, not likely, because she died soon after moving to Ashtead. Given her respiratory problems and the London smog, I think she moved to Surrey to escape the London air. Loitering in the graveyard, I noticed the air was fresher than that we’d left behind. More practically, her husband Everard Cotes would have been able to commute by rail to his job in London.

There was a construction project in part of the churchyard, and we arrived just before the Anglican church service began, so people were arriving as we were exploring. My disappointment at the dull sprawl of the town’s streets was counteracted by the churchgoers themselves, because they included families; this restored to Ashtead its village feel.
With two of us it didn’t take long to find Duncan’s headstone, already photo documented by Karyn Huenemann. Yet I lingered in the wet grass, snapping photos from every direction, while trying to avoid accidentally snapping the churchgoers. I noticed that the stone had recently been cleaned of moss, and that this cleaning made it even harder to read the legend: “This leaf was blown far.”

This cross and fountain was erected to Mrs Mary Greville, who died in 1877 to honour her good works

When I got pneumonia about seventeen years ago, I remember saying in the morning, “I feel peculiar.” As the day progressed into fever and a visit to hospital emergency, I felt more than peculiar, but that memory of a sudden intangible difference to my well-being has never left me. Perhaps that’s why I find this short description of Duncan’s death by her niece moving. (She calls Duncan by her family nickname of Redney.) This excerpt is from the niece’s memoir first published in Canadian Literature #27, Winter 1966 (pg. 15 – 19):

At the end of the War my Uncle retired and I went Home to England with him and joined my Aunt in her Chelsea house. Then she and my Uncle started to look for a home near London, but in the country. In the early Spring they
found one at Ashtead in Surrey….

… Just after breakfast one morning in June I went in to the garden at a call from Aunt Redney — she was standing on a flower-bed with a fork in her hands, and said “I feel awfully queer.” I got her to bed with hot bottles, and then ran across to some kindly neighbours to ask who and where was a doctor; then I ‘phoned my Uncle. I don’t know now how long she was ill -— perhaps ten days — but I was with her at the end and she turned her head towards me and opened her wonderful blue eyes, so live and clear, as if she would impress something on my mind, and then closed them for ever.
-M.E.R. (Mrs Sandford Ross), “Sara Jeannette Duncan: Personal Glimpses,” Canadian Literature, p. 19.

Duncan’s gravestone is kept in good condition: the stone is free of moss and only a few sticks littered it. 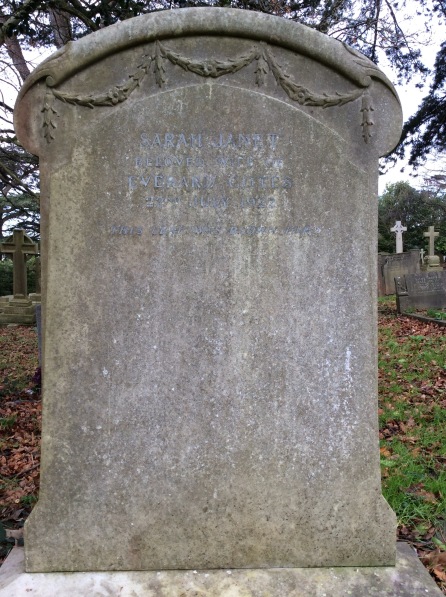 It is hard to make out the inscription of Duncan’s tomb. 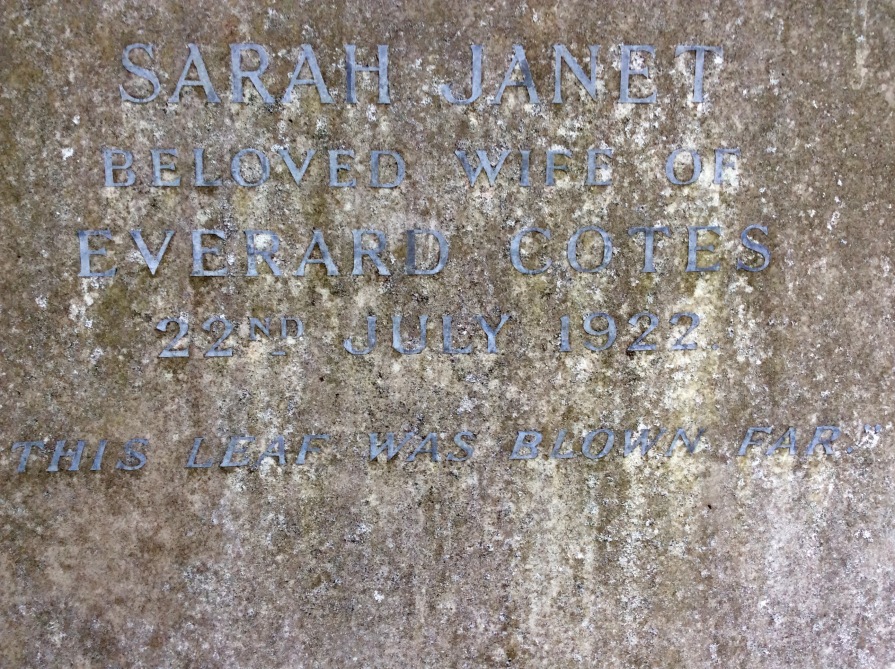 Gravestone of Sara Jeannette Duncan in churchyard of St Giles’. 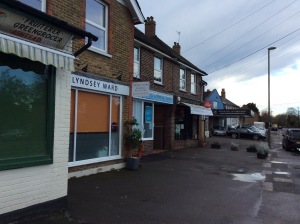 Was this shop a going concern in Duncan’s day?

All photos by Debra Martens