It’s Canada Day, and I am thinking about that poet at the Vancouver Olympics: Shane Koyczan, spoken word performer. I think that was brilliant, figuring out a way to put a writer into an international sports event. Although maybe a performance poet wouldn’t call himself a writer… Best ask him. Anyway, my point? On Canada Day writers are not on stage. Search “Canada Day celebrations” and you get beer, ball or floor hockey, and live bands. Wings, burgers, poutine. But a poet? Am I wrong? Has there been a writer warm-up act at the Ottawa Canada Day celebrations? Maybe there has — let me know.

Writers are, I guess, on the other side of the stage, watching, observing, hoarding it up, and having, er, fun. This particular writer is so much not fun that I forgot to sign up for the reception at the High Commissioner’s residence. Is it sacrilege that I cleaned the toilets instead? I love Guardian columnist Lucy Mangan, who hates going out so much that her husband has proposed home schooling so that they don’t have to deal with other parents. Ok, the truth is that I am going out later — to Evensong at Westminster Abbey. 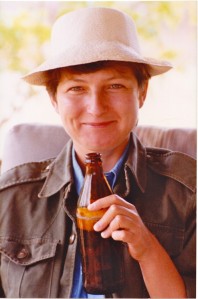 A Kenyan brewski and a hat now frayed

What are other international Canadians up to?

London’s Trafalgar Square splash has been cancelled this year. Maybe a Canada House under scaffolding doesn’t look so festive? No, actually, Canada Day International events in London and New York were cancelled for lack of sponsorship. The feds don’t pay for fun anymore? A local pub is stepping up to fill the gap (see Toronto Star article).

And in Berlin? Wait, what? The embassy is inviting you to watch a dance performance? (Alice) In Stuttgart? As found on Deutsch-Kanadische Gesellschaft website.

In Paris, the embassy is having a pre-registered gathering. Then you can repair to the pub. Maybe when I get home from Evensong I’ll try out the Paris Star’s Canada Day Playlist. Or not. I’ve got lots of reading to catch up on.

This not-new link refers you to Canadian themed pubs in Spain and Mexico and elsewhere (huffingtonpost.ca).

Three cities is hardly representational. What other events are happening around the world for Canada Day?