Of Goats and the Lyrical

Sonia Saikaley interviews Irene Marques (PhD Comparative Literature). Marques writes in English and Portuguese and teaches at Ryerson and York universities. In 2007 she spent a year in South Africa conducting research. In addition to her many academic publications, and a short story collection, she has published three poetry collections, Wearing Glasses of Water, The Perfect Unravelling of the Spirit (Tsar 2012) and The Circular Incantation: An Exercise in Loss and Findings (Guernica 2013). Her novel My House is a Mansion will be published by York University (Leaping Lion Books) in 2015. The following is an edited text of an e-mail interview.

S: In 2007 you spent a year in South Africa. How was your experience there? Were you able to fully immerse yourself in the culture? I lived in Japan for a year and I found that the act of writing evolved for me in that country. I  felt more connected since I was seeing everything as though I were a curious child again. Everything was entirely new to me, from grocery shopping to observing traditional ceremonies. Did you have this sense of newness and curiosity while you lived in South Africa?

M: In 2007/08 I received a Mellon post-doctoral fellowship to conduct research in South Africa. I was investigating colonial encounters between early male European colonists and African women. My experience in South Africa was difficult. I felt isolated: It was difficult to move around freely given the high levels of violence, especially in Johannesburg, where I was, and I did not drive or have friends to socialize with. I was also disappointed to see the levels of poverty, inequality, racism and gender imbalances that still exist there. The dream of Nelson Mandela had not been fully realized — the so-called rainbow nation seemed a myth. There was (is) a saying there: “People now live side by side but not together.”

Yes, I did have that curiosity and fascination of being in a new country. Prior to going to South Africa, I had been working and studying without a break, so the stay there allowed me to relax, think deeply and enter writing in a different way. In my isolation I had the time and the distance to write a lot of fiction and poetry, both in English and Portuguese. My recently published collection of poetry, The Circular Incantation, was written while there. I also wrote my impressions of post-apartheid South Africa. I guess I was naïve, but being naïve may be good because it allows us to see things as they should really be. Or in the words of contemporary Portuguese writer, Valter Hugo Mãe, “When we dream such great dreams reality learns.”

S: It is admirable that you write openly about the human body and how it relates to the land as well. Many of the scenes in your poems draw out such rich sensory details. Would you say that your experiences of having lived abroad helped ground you in sensual details?

M: I don’t know if having lived in other countries contributes to that. Perhaps. I was of course brought up in a fairly conservative Catholic society where sexuality and the body were not explicitly talked about. Perhaps having grown up in a village in a mountain range opened me up to the physicality of things: the land, the immensity of the mountains, the sky, the uncanny and vivid visibility of the stars that felt very near, the general closeness to nature, the animals who lived side by side with us, the people’s suffering and material poverty, their constant manual labour on the land within a system of agricultural subsistence, the carrying of buckets of water from the fountain every day because there was no running water at home, the mistreatment of animals.… Perhaps it is just something that my own poetic sensibilities and existential search call for. What I look for in writing is an experience of holism, an entrance into a totalizing experience. 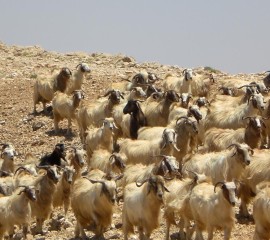 S: You were once a goatherd, weren’t you? My own parents lived in a mountain village with goats and I often find myself writing about my Middle Eastern heritage, including writing about those goats! My parents shared wonderful stories about their homeland with me. I guess no matter where we go or end up we will always belong to the country where we grew up. Do you agree with this?

M: Yes, I grew up in a village situated high up on the Caramulo mountains in the northern interior of Portugal, and so those experiences with the goats and the physical surroundings are often present in my writing, especially in my poetry, which tends to be very lyrical. The Circular Incantation includes goats in the dedication. I adore goats: I’ll tell you a story. When I was young, I would take the goats to pasture on the mountains with my best friend Isabel. We would play all afternoon, and then, when it was time to bring the goats back home, we could not find them. They had wandered off in search of adventure and herbal delicacies hiding in slippery and dangerous cliffs and rocks… We would be terrified because we knew our parents would give us a good spanking. Our solution? We would make promises to Our Lady of Fátima promising her that we would pray seven Hail Marys and ten Our Fathers (or more or less depending on the situation) if the goats appeared. I was not always good at keeping the promises and sometimes I still have nightmares where I am told by the Lady of Fátima (her finger pointing at me) that I owe her: “You have not paid your promise!”

S: You came to Canada from Portugal at the age of 20. How does this duality of having one foot in one culture, the place of your birth, and having another in your chosen home influence your writing?

M: I think my cultural duality reveals itself in many ways in my writing. My writing has revolved a lot around memory. How I perceive Portugal, my family, my former self, now that I have distance from all that — one always sees things better, more objectively and fully, when away from them. This is not unique to writers who have left their place of birth to live elsewhere, as all writing could be said to be about memory. Language is memory, as it captures the idea of something, not the thing itself. A substantial part of my writing deals with historical, social or cultural aspects specific to Portugal, such as the colonial wars in Africa (my two older brothers went to the colonial wars in the early 1970s), the Portuguese dictatorship of Salazar, and the traditional and rural milieu I grew up in, where religion, poverty, life’s hardships, and class distinction were prevalent.
It also deals with the Portuguese in Canada. I examine the coexistence of different ethnicities/cultures, or put differently, the business of getting along with the “other” — this last aspect being closely linked to Canadian (Torontonian) life and also paramount in my academic research. I recently finished a novel in Portuguese that explores the Fascist regime in Portugal and the colonial wars in Africa. My long-term goal is to write about subjects that are new to me because writing is about exploration of self and the world. I do not believe that one should only write about the things we know or which are close to us.

S: What do you miss most about South Africa and Portugal? Would you ever consider returning to those countries for an extended period of time?

M: I may return to South Africa for a visit if I have a chance — though I want to explore other countries like Mozambique, Nigeria, Senegal, and Morocco. Portugal is a home of course — and a very important one. I go there every year for a couple of weeks at least to visit. My mother is 85 and I want to see her as much as I can before she goes, but I don’t think I want to live there for extended periods of time — not now anyway. But perhaps when I am older I’ll become a goatherd again.…

Sonia Saikaley’s poetry and short stories have appeared in several online and print journals. Her first book, The Lebanese Dishwasher (Quattro Books), was co-winner of the 2012 Ken Klonsky Novella Contest. Her first collection of poetry, Turkish Delight, Montreal Winter, was published by TSAR Publications in 2012. A graduate of the Humber School for Writers, she lives in her hometown of Ottawa, near her large Lebanese family. From 2007 to 2008, she worked as an English teacher in Japan.

About The Circular Incantation, Guernica Editions
About the academic publications by Irene Marques
Saikaley on writing in Ottawa Poetry Newslette