The Art of Frances Itani: Review of That’s My Baby 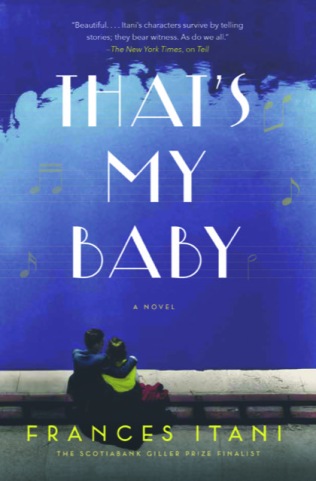 Are artists more accessible to authors as characters because artists, as do writers, observe the world and its creatures? Frances Itani’s novel, That’s My Baby (HarperCollins 2017), includes three main characters: journalist Hanora Oak, teacher Billie Read, and the fictional artist, Mariah Bindle. Like Canadian artists from the early 20th Century, such as Brockville-born Harriet Ford, and the more famous Emily Carr, Bindle studies and works in southern France and Cornwall.

Itani is not alone in her use of an artist to build narrative. Jane Urquhart braids the life of artist Kenneth Lochhead into her novel The Night Stages, tying him to the ongoing story when her character is stuck studying Lochhead’s mural at Gander airport. In Ali Smith’s How to Be Both, the painter whose work is viewed by a troubled teen gets to speak in the second half of the book. Unlike those novels, however, Itani integrates the life of the artist in several ways, tying several knots. First, Hanora Oak, the main character, is rounding off her journalism career with a book about Mariah Bindle, which is why she is reading her diaries. Second, like Hanora, Mariah was in England during the war, and Bindle’s drawings of bombed Coventry add an emotional depth to the period that Hanora’s recollections of her own job in a canteen do not. The Coventry sketches show “destroyed buildings, a house in greys with its entire front blown off, rooms hanging in the air so that the whole resembles an oversized but badly tilted dollhouse.” (p. 262) Or as Itani says of the music at the end, “Someone adds darker bits with growly undertones.” (p. 343) 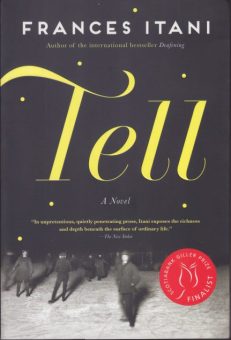 That’s My Baby is the third of a trilogy about the O’Neill family from Deseronto, Ontario, and is set mainly in Ottawa, with flashbacks to England, Deseronto, life on board ship — and jazz. The two main time periods of That’s My Baby are 1998, when Hanora’s cousin and friend Billie Read has to move from her house into an assisted living residence while Hanora tries to research her book, and 1939, when the two cousins took the SS Champlain from New York to England. In 1939, Hanora is seeking a new identity, having learned months before that she is adopted, while Billie is fleeing a relationship gone off. Travelling with them are Duke Ellington and his retinue; his music frames the novel. For fun, the cousins swap identities, with heartbreaking consequence.

At the age of 78 in 1998, Hanora Oak is taking care of Billie, who has dementia. While Billie is in the process of losing her identity, Hanora is in the process of recovering hers. If you’ve read Itani’s Tell, you know who Hanora is — you know that she was adopted and why. But despite searching for her birth parents for years, Hanora doesn’t know until the end of this novel. The fun for the knowing reader is identifying and following the clues that Itani mixes into the story, like raisins in a good oatmeal cookie.

The third way that Itani brings Mariah Bindle into Hanora Oak’s story is by providing a clue, or evidence, in Hanora’s lifelong search for her birth parents. I love coincidence, especially when it happens to me. But it seems quite a coincidence that the artist that Hanora studies was also in England during the war, in Coventry nonetheless, the same place that an important passenger on the ship was going. It is more of a coincidence that Bindle drew the woman who turns out to be Hanora’s mother. Finally, it is very convenient that Hanora’s upstairs neighbour turns out to be a photographer who can help with her Bindle research.

We are warned that Billie holds the key to Hanora’s past, with such sentences as “Despite Billie’s memory loss, sparks of truth erupt.” (p. 30) Over thirty pages later, Billie drops the first of the obscured clues, as if it were a bit of unfinished business bothering her. (p. 68)  Yet Billie is the one who chucks things in a trunk and never looks at them again, who asks Hanora why she bothers with old things. Hanora’s father, Kenan, by contrast, “chronicled his way through life, inventing ciphers, connecting present with distant past.” (p. 141) The pair are contrasting influences on Hanora.

There are loose ends. We are not told, for example, when Kenan dies. Hanora doesn’t show much interest in Kenan’s adoption, something unresolved at the end of Tell. Although Tress died eleven years before this story opens, and Hanora “still grieves their deaths” (p. 154), Hanora gives no thought, not even by way of comparison with Billie’s situation, to having had to empty the house of her parents in Deseronto. Worst, however, is that after Hanora finds out who her birth father is, she never checks where or when he died, if he has, despite saying it would be easy enough to do. Is this the height of realism, to imitate the way life is all loose ends? Despite them, the book is a very satisfying story.

Itani’s novel Deafening is the first of this trilogy (Deafening, Tell and That’s My Baby) — and the best. Deafening is a treasure of a book, crammed with detail and imagery and, above all, sound. The noise of war, and Grania’s silences, in Deafening are followed in the next two books by music. While Deafening had me savouring it sentence by sentence, Tell and That’s My Baby are easier to read, stuffed with dialogue and lyrics and descriptions of drawings and photos. In fact, if I were starting the trilogy, I would read the last book (That’s My Baby) first to finish up with the triumph of Deafening.

Frances Itani lives in Ottawa. Before settling into that home, she first lived abroad while at Duke University in North Carolina for a year in the 1960s, a decade that also saw her in London, England. She lived in Heidelberg for three years, Cyprus during the first Gulf War, and Croatia during the Bosnian War. From 2002-2004, she lived in Geneva. Not surprisingly, Itani speaks some French, German, and Spanish.
Frances Itani studied American Sign Language for three years while researching her novel Deafening, which won the 2004 Commonwealth Award for Best Book. Her story collection, Poached Egg on Toast, won the 2005 Ottawa Book Award for Fiction and the 2005 CAA Jubilee Award for Best Book of Short Stories.