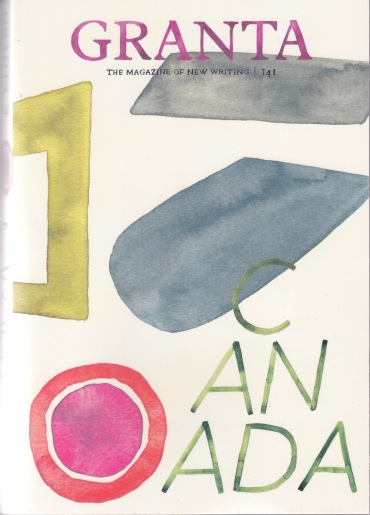 The literary journal Granta published a special issue on Canada (Autumn 2017) edited by Catherine Leroux and Madeleine Thien. Single-handedly Thien has done more to promote Canadian Literature outside of Canada than this website has. She has taught writing around the world ( China, Germany, Nigeria, the United States, Zimbabwe, Singapore, and Japan). Thien has garnered prizes for her fiction both in Canada and abroad, such as the Frankfurt Book Fair’s 2015 Liberaturpreis for her novel Dogs at the Perimeter (2011). Her gripping novel, Do Not Say We Have Nothing (Alfred A. Knopf Canada / Penguin Random House Canada), won both the Scotiabank Giller Prize and the Governor General’s Literary Award for Fiction in 2016.
Co-editor Catherine Leroux won the Prix France-Québec in 2014 for her novel Le mur mitoyen, which has been published by Biblioasis, translated by Lazer Laderhendler as The Party Wall.

Language becomes its own landscape in this issue of Granta. Language falls apart, twists, reformulates, shatters and revives itself.4 Animal and self, unfinished history, land and waterways, colonization and dispossession, settlement and refuge – all these nouns are part of the truth of this place.5 Here, like everywhere, there will be no cohesive mythology, no finality to what can be seen...
-Madeleine Thien, Introduction to Granta Issue 141.

How did these two well-qualified writers choose the entries to this prestigious publication? Madeleine Thien set a simple guideline: “What is being imagined here, now?”

Not surprisingly for a collection coming out of a country as diverse as Canada, everything is being imagined here now. A sad story by Alexander MacLeod about a man and a rabbit; a silly story from Margaret Atwood about mushrooms and Martians. Two sort-of sci-fi pieces, “The Rememberer” by Johanna Skibsrud and “Cloud Seeding” by Krista Foss. A wonderfully angry play called “Two Indians” by Falen Johnson. An essay by Acadian France Daigle probing the pain of “linguistic neurosis,” (p. 240) titled “What Is It That Hurts?”

I have a bad habit of starting to read a book while walking to a chair, and for me the true measure of a great story is the one that literally stops me in my tracks. I continue reading while standing, gone from my room into another world. Two pieces did that to me: Alain Farah’s story, “Life of the Father,” and Dionne Brand’s prose poem “The Blue Clerk.”

But they were all good, the essays about writing, the photo essays (one by Douglas Coupland and a better one by Paul Seesequasis), the poems and the revisioning of “Wallace Stevens’s Memory.” The creative nonfiction essay, “Mangilaluk’s Highway” by Nadim Roberts, which opens the issue.

Did they do a tally, our editors? Of the 28 pieces, I can tell you that seven were translated from the French (the originals are available on the Granta website) and there were four contributors who identify as coming from the languages that Thien mentions in her Introduction : Ojibwe, Cree, Innu, Mohawk and Tuscarora. One of whom gets the last word. This is from Naomi Fontaine’s memoir, “Tshinanu”:

Of course we are different. We speak a language that is foreign to you, though sometimes we stray into yours to name modern objects and digital spaces. We live in villages that other people call reserves, but if you knew the language you would understand that we inhabit the territory. Of course our houses are made of wood and cement pushed into the earth. Our facades are not brick. Our fences are never solid enough for those who have travelled long distances. Nor our hearths warm enough for those in constant need of a pat on the back. Closeness has nourished us, raised us, turned us into men and women. We are the people of the North. (p. 283)

If you haven’t already, buy it, borrow it, read it.