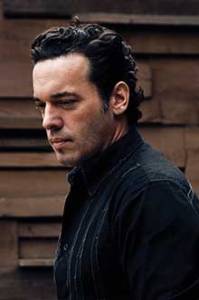 Joseph Boyden is a Canadian author (heritage part Anishnaabe, Irish and Scottish) who lives during the school year in New Orleans, where he teaches at the University of New Orleans, and in Canada, where he has been writer-in-residence at several universities. He also spent time in France researching battlefields, teaching in New Mexico and travelling in Spain and South Africa. His short story collection Born With a Tooth (Cormorant Books 2001) was followed by Three Day Road (Penguin Canada 2005), which introduces the Bird family through Xavier Bird, a sniper returning home from WWI. We meet Will Bird (bush pilot) and his niece Annie Bird in Through Black Spruce (Penguin Canada 2008). In The Orenda (Hamish Hamilton 2013), Bird is one of three narrators to tell a mid-17th century story set in the corn country of Georgian Bay. Awards aplenty: Rogers Writers’ Trust Fiction Prize for Three Day Road, the 2008 Scotiabank Giller Prize for Through Black Spruce and Canada Reads 2014 for The Orenda, among others. Joseph Boyden was made a Member of the Order of Canada in December 2015, receiving The Diamond Jubilee Medal, “For his contributions as an author, who tells stories of our common heritage, and for his social engagement, notably in support of First Nations.”

A story that starts with the hunter in turn being pursued forces your attention: who are these people, what have they done, will they survive? A Jesuit stumbles through the snow carrying a young woman captured from the Iroquois, following their Huron captors because that fate, whatever it might be, is better than what awaits him at the hands of the Iroquois now in pursuit. Details make it clear that death also tracks their snowshoe prints: the Jesuit’s swollen tongue, the thorn club that hits him, the bite he receives on his face for taking his snowshoes off, and the girl so scared that she is stiff as a plank — violence, fear, and everywhere the cold snow that they stumble through.
Joseph Boyden makes the story more complex than mere survival, however. Very soon into the Jesuit’s first-person chapter of their flight from the Iroquois, or the Haudenosaunee as the Huron call them, Boyden traps us into moral complexities as relevant today as in the mid-1600s. The Jesuit, or the Crow as they call him, picks up the traumatized girl and carries her, aware that he does so not out of goodness but to save himself – that if her people catch up to him, they might spare his life for saving hers.
Similarly, revenge killing might feel uncomfortably familiar given Old Testament eye-for-an-eye or the news coming out of lands occupied by ISIS. The leader of the raid, Bird, properly known as Tsawenhohi, of the Wendat nation of the Huron, slaughters the Iroquois family he finds in their wintering grounds in retaliation for the murder of his wife and their two daughters. This we learn as Bird narrates in first person, addressing You, you being “my love” his dead wife. He spares the life of the young woman they find hiding behind a bush in the hope of adopting her, of making her into his daughter. Yet he is aware that these raids are his idea, that he is putting his friend Fox, “a great war-bearer” at risk of a “particularly brutal death.” (p. 18)

The girl, Snow Falls, is a Seneca, an Onondawaga of the Haudenosaunee, with special powers, which she reveals by recounting that she foresaw her family’s death in a dream. After she fails to kill herself by freezing, she vows revenge on Bird and his people. That she will be drawn in by the Crow is hinted at by the way she confuses the crucifix he wears with the image of her dead father. The pockmarks on her face, and her reference to “the shaking sickness” reveal the Iroquois too have had visits from the Europeans.
Indeed, further sickness is hinted at, as the Jesuit not only has black toes from frostbite but also his “chest has filled with a sickness that’s turned my skin yellow.” (p. 6) Which will be worse for the Huron, his contempt for their own magic — the life force in all living things, the orenda — or the foreign diseases he carries with him? 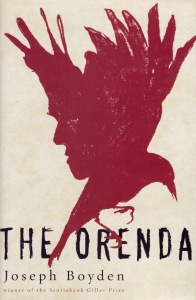 In the first three short chapters, Boyden introduces the most important characters and plot elements that are so intertwined as to be inevitable. The capture of Snow Falls and the presence of the Crow among the Wendat – these two things raise complex relationships. After these three foreshadowing chapters, Boyden lengthens out with longer chapters that alternate the points of view, developing the characters carefully: while I might not like their actions I find I care about what happens to them. Will Snow Falls learn to love Bird as a father or will she destroy him, betray him and the Wendat? Will Bird rid himself of the Crow? Will Bird’s best friend Fox survive the plan hatched by Bird and his lover Gosling (another outsider imbued with magical powers, an Anishnaabe, a Nipissing from the north), a plan meant to undo the capture of the Crow and Snow Falls?

Throughout we are given an easily digestible lesson in the ways of the Wendat, thanks to the journal the Jesuit writes for his Superior, and to Snow Falls, who is constantly comparing her people to the ones she finds herself among. While Snow Falls’ actions are at first post-traumatic (not eating, not speaking, peeing on Bird’s bed), by spring she joins the planting of the three sisters (corn, beans and squash), as this is something her people do also. “My people are a farming people, just like these Wendat. We are a part of this earth. We speak similar tongues and grow the same food and hunt the same game. Yet we’re enemies, bent on destroying one another. I don’t understand it. But then I think of you lying dead, my family…” (p. 51)

Bird’s home is in a longhouse of eight families each with their own fire, who sleep on raised platforms during winter, their food stores hanging from the rafters. Bird recounts the gifts people bring him in order to watch the Crow trying to speak their language: baskets, ochre, strips of leather, smoked fish. The description of life in the longhouses in its seasonal cycles alone should make this book mandatory reading in all high schools in Canada – but what author would want that curse sent down upon their book? Autumn brings trading of Wendat corn for Anishnaabe deer meat and pelts, winter socializing, and summer brings farming, hunting and trading with the Iron People.

The Jesuit, later named Christophe, between his notes of disapproval of the “sauvages,” puts Bird’s longhouse in a larger context:

I record in my journal that each longhouse is the length and width of a small ship, and families related through the women reside within. As far as I can tell, eight or ten families, each with its own fire, fill these residences with the noises of humanity. I’ve estimated anywhere from forty to sixty souls in each longhouse, and I believe there to be at least fifty longhouses in this community. What’s more, I’ve been told that this village is just one of many in what I’ve termed Huronia, this land they call Wendake. (p. 28)

Although the history student in me craves actual quotations from the Jesuit Relations, I understand that even this bit of exposition risks the story’s momentum (also, the condescending tone of the Relations in this excerpt would put the reader off.) The Crow’s facts, however, make more credible the move undertaken by the extensive community in the spring in search of soil not exhausted by their agriculture.

Through Bird, summoned to a council of the elders, a smoky all-nighter, we learn of strategies to protect their position as the traders with the Iron People, to keep and protect the Crow, a necessary evil (p. 69).
First from the observations of Snow Falls, then from the account by the Jesuit, and third from Bird’s moving address to the bones of his wife in his arms, we learn also of the Feast of the Dead and the reburial of bones. By the end of the novel I could even understand, but not sympathize with, the cutting and burning torture of prisoners that the Jesuit so much feared at the beginning.

Of course the characters undergo transformation, except Bird and Gosling, who are of the few who saw what was coming when the crows condemned the orenda as unclean. All three main characters are heroic, as are their friends and lovers. While I can’t give away the ending, I can sadly say that all that was foreshadowed came true. The Wendat were “dispersed like cornhusks in the wind.” (p. 25) The way the book comes full circle forces one to ask: what one thing are we doing now that will change everything for our people?