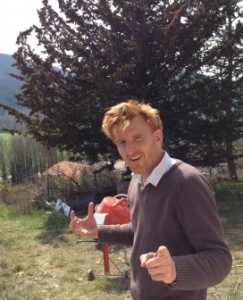 Jeremy Mercer is a Canadian author now living in France. To prepare you for CWA’s forthcoming interview with him, here are some quotations from his work.

From Time Was Soft There: A Paris Sojourn at Shakespeare & Co. by Jeremy Mercer (Picador 2005):

It was now March. I had been at the bookstore more than a month, but it felt like time had barely passed. …
In the criminal world, there is a term, hard time, which refers to difficult prison sentences in maximum-security facilities or under some form of protective custody. This is for dangerous convicts, the murderers, the sex offenders. Hard time goes slowly and painfully and leaves a man bitter when eventually he does get released into the world. At the opposite end of the spectrum were the medium- and minimum security facilities, which were designed to rehabilitate offenders. Here there were libraries and weight-training rooms, high school-equivalency classes and floor-hockey tournaments. … This was known as soft time, time that went easily, time that was a pleasure to do.
Time at Shakespeare and Company was as soft as anything I’d ever felt. (pages 168-169)

From When the Guillotine Fell: The Bloody Beginning and Horrifying End to France’s River of Blood 1791-1977 (St Martin’s Press iBook):

Marseille is the anti-Paris. Lodged among the rocky cliffs on France’s southern coast, it is a brash and sun-scoured city. Instead of the refined culture and polished façades of the capital, this sweaty port exudes a raw humanity difficult to find in the north. There is little of the wealth of Paris and none of the rush…. (p. 9-10)

The mistral is a violent wind that swoops southward from the center of France and along the Rhône valley. It torments the Mediterranean coast, particularly the stretch between Toulon and Marseille. It shakes windows, it steals laundry from clothes lines, it tears clay tiles from roofs. (p. 17)