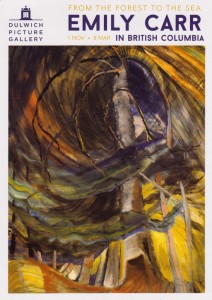 Coming out of the Emily Carr exhibition, “From the Forest to the Sea: Emily Carr in British Columbia,” at the Dulwich Picture Gallery, I heard the family behind me speculating whether they could make a trip to British Columbia this summer. Which part appealed to them most, I wondered: the trees, the totem poles, or the seascapes?

The exhibition, which runs until 8 March, is organized by themes (trees, Haida villages, and landscapes and seascapes) that correspond to the periods of Carr’s artistic development. Each of the four exhibition rooms also has a display case: loans from museums of Haida artefacts in two rooms, and Carr’s journal and sketchbooks in two other cases. Everything was exceedingly well documented. The panel texts on her artistic training and later influences put her work into an experimental context. Viewers are urged to consider movement (trees) and light (seascapes).

If ever there was a heroine of true grit in the history of art it was Emily Carr, a painter of such singular strength and beauty it is almost impossible to believe that the revelatory exhibition at Dulwich Picture Gallery is her first in this country. Carr’s landscapes of the high skies, wild bays and deep forests of the Pacific west coast of Canada – whispering with sound, radiant with inner movement and mysterious light – are as exhilarating as the places they represent.
-“From the Forest to the Sea: Emily Carr in British Columbia review — Canada’s very own Van Gogh,” Guardian 2 November 2014 (which offers photos of Carr’s work as well).

Instead, I found myself drawn to her middle period, the late 1920s and early 1930s, after she’d been introduced to the work of the Group of Seven. These are darker paintings with stylized totem poles; in at least one case the totem poles are foregrounded by leaving out the people and objects around them. Perhaps I preferred the ominous because I’d come through a month of feeling suffocated by cannon-black clouds, or perhaps because I am going through my own middle period, when no fiction that I write seems good enough, each short story more of a struggle than in my dash-it-down years.

Not only did Emily Carr study in England, she also wrote about her early years. More on that later.

It takes an hour to get to Dulwich by train from central London. It has the feel of both a village and a quiet suburb of London. We found a good meal in a The Plough pub. Having a cup of tea in Belair House, the dog and I found ourselves surrounded by a 60th birthday party which garnered her much attention. And we visited Dulwich Books in West Dulwich, where I was delighted to find a signed copy of a Quebec book in English translation: Denis Thériault’s The Peculiar Life of a Lonely Postman, translated by Liedewy Hawke (Hesperus Press 2014).