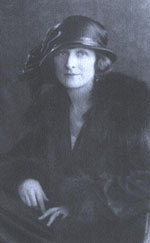 There is nothing quite like poking about second-hand bookshops while on vacation. I was looking for anything by Sara Jeannette Duncan. Instead I found Ethel Wilson’s first novel, The Innocent Traveller. The cover of this 1960 edition is lovely, with a woman wearing a hat with travel information spread out in front of her. But the contents are slightly disappointing. It is not as much about travel as Graham Greene’s Travels With My Aunt, and not as much about innocence as Henry James’s Daisy Miller.

The central character, Topaz, does go to Brighton for boarding school, and takes a quick trip to Paris with her brother to recover from disappointment in love — summed up in one enthusiastic paragraph or so. Topaz’s grand trip occurs in middle age, when she moves with her sister and niece to Vancouver. No, the innocent in the story is Topaz’s other sister, Mary, who is first introduced in this way: “Out she went to India, poor Mary, to marry a missionary. Glory surrounded the absent Mary who soon bore two little spinsters in the heat and died. Poor Mary, buried almost as her eyes closed, in that distant consuming heat.” It is the child Topaz who informs us of Mary’s innocence by quoting an overheard conversation on the day that Mary leaves.

Despite the long voyage, Mary arrives mere paragraphs after she leaves. And here is her arrival. Read it with Duncan’s marriage to an English man in India in mind, or with the voyages of so many missionary wives. Read it but do not weep, because Wilson mocks.

Mary, dressed in the grey of a dove, found herself arrived at the inevitable moment. She stood alone facing this man who was Edward, but who was nearly a stranger. She was more alone than she had ever been in her whole life. She was in India. She had reached the Mission Field. She looked steadily, almost fearfully, at Edward and tried to smile. … Mary broke into weeping which she could not restrain, sprang forward and cast herself, more in homesickness than in love, upon Edward’s beard.

Wilson’s father, Robert Bryant, was a Methodist missionary in South Africa. By the time she was ten, both of her parents were dead, and she was sent to live with relatives, first in England and then in Vancouver. When I first read the text above, I wondered how she could write so callously of a death so similar to her own experience. On second reading, it seems to me to be coldly angry.

Topaz reports her father’s remarriage, after the “fatal birth”, as a conversation among children. “Did you know that Father is going to Grindelwawld?” It seems that Father must go to Grindelwald Switzerland to be able to marry the sister of his deceased wife. Pronounce the “w” as a “v”, you Harry Potter fans.