T.C. Haliburton and the Olympics

The London Chapter of the Haliburton Society is joining the Olympics, in the same way that the Cultural Olympiad is running in parallel with the London 2012 Olympic Games. It’s hosting “From Canada’s East Coast to London’s East End – in time for the Olympics!” Four participants are confirmed for this verbal Olympic event at the Leytonstone Library Hall in London from August 1-3, 2012. (No one is paid but authors are able to promote and sell their books at the event.) The library hall holds eighty people and the Society will offer wine and beer 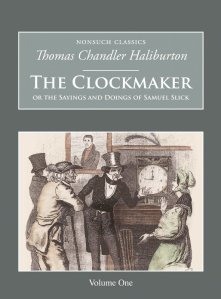 Two alumnae of University of King’s College in Halifax started the London Chapter of the Haliburton Society in 2006: writer John Stiles and and Chris MacNeil, who is involved with Network Canada. Stiles explains where the notion to start a London branch came from: “The seed of the idea was born when I saw an article in The Times mentioning that Nonsuch Classics were republishing, The Clockmaker or the Sayings and Doings of Samuel Slick, as well as its follow-up: The Attaché or Sam Slick in England. [“Dickens’ rival judged fit for return” by Dalya Alberge, The Times: 06 February 2006.] This republication seemed like an event worth celebrating, particularly as the Times article indicated that Haliburton was a rival in popularity to Dickens.”

Established in Windsor in 1884 in honour of Thomas Chandler Haliburton, the Haliburton Club’s mission was to promote the knowledge not only of the works of Haliburton but also of Canadian literature. Proud of being the oldest literary society on a campus in North America, today’s Haliburton Society is a literary club at the University of King’s College that meets to read and discuss texts. The Society also organizes an annual essay contest.

There is another connection between Haliburton and the (winter) Olympics: some claim that Haliburton’s “hurling on ice” is proof that hockey’s origins lie in Nova Scotia.

Here’s an excerpt of The Clockmaker: “Politics makes a man as crooked as a pack does a pedlar; not that they are so awful heavy, neither, but it TEACHES A MAN TO STOOP IN THE LONG RUN.  … It beats cock fightin, I tell you, to hear the Blue Noses, when they get together, talk politics. They have got three or four evil spirits, like the Irish Banshees, that they say cause all the mischief in the Province—the Council, the Banks, the House of Assembly and the Lawyers. If a man places a higher valiation on himself than his neighbors do, and wants to be a magistrate before he is fit to carry the ink horn for one, and finds himself safely delivered of a mistake, he says it is all owing to the Council. The members are cunnin critters, too; they know this feelin, and when they come home from Assembly, and people ax ’em “where are all them are fine things you promised us?” why, they say, we’d a had ’em all for you, but for that etarnal Council, they nullified all we did. The country will come to no good till them chaps show their respect for it, by covering their bottoms with homespun. If a man is so tarnation lazy he wont work, and in course has no money, why he says its all owin to the banks, they wont discount, there’s no money, they’ve ruined the Province. If there beant a road made up to every citizen’s door, away back to the woods (who as like as not has squatted there) why he says the House of Assembly have voted all the money to pay great men’s salaries, and there’s nothin left for poor settlers, and cross roads. Well, the lawyers come in for their share of cake and ale, too; if they don’t catch it, its a pity.” 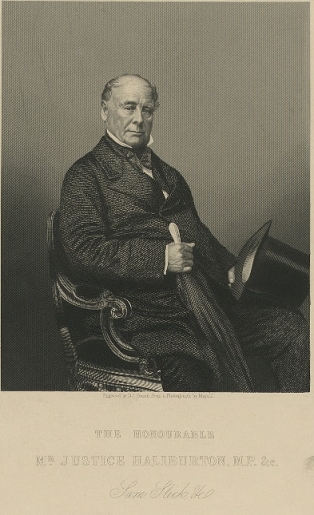 Stiles is especially appreciative of Sam Slick’s expressions: “As a native writer from the Annapolis Valley in Nova Scotia, I have always been interested in witty and funny sayings and have tried to incorporate Nova Scotian expressions, such as “tighter-than-a-mouse’s-hole stretched-over-a-barrel,” into my works.” He is the author of the poetry collection Scouts are Cancelled and the novel The Insolent Boy, among others. Sam Slick’s sayings are still popular today. Have a look at this list.

Haliburton is also a good example with which to continue the discussion on dialect. Fred Cogswell is the author of the Haliburton entry in the Dictionary of Canadian Biography Online: “Haliburton’s use of language added American to Lowland Scots on the list of English variants which a writer could use with a fair chance of winning appreciation and acclaim. In this regard, he paved the way for that great democratic prose epic of America, Adventures of Huckleberry Finn. Furthermore, his gregarious and sociable nature enabled him to study at first hand the many individual and unusual types which were fostered by the isolation and social freedom of a frontier. At the same time, his knowledge, derived from both reading and experience, of traditional propriety and genteel British behaviour gave him a frame of reference within which to place these excesses. … It is ironic that Haliburton, the arch-tory, should have become the “father of American humour” in the most democratic sense. The success and popularity of Sam Slick established at the same time the vogue of the folk hero…” 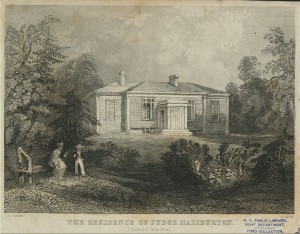