“I think you will love me if I have stories too.”
-Teo in Sanctuary Line by Jane Urquhart, MacLehose Press, p. 215

When I asked Jane Urquhart if living in both Canada and Ireland affects her work, she answered that having two homes doesn’t affect her work, but Ireland does. She has a small place in the mountains where she wrote four of her novels. She said despite telling herself to keep Ireland out of it this time, “it nuzzles its way in.” She can’t keep it out, the landscape, the people. One thing that particularly impresses her is that a writer is more integrated into the community in Ireland than one would be in Canada. There is nothing remarkable about a writer living among farmers: “they don’t exoticise a writer.” She gave as an example John B. Keane, an Irish writer who kept a pub even after his work did well (The Field), and in fact he died in his pub.

She also lived in a beautiful village in Burgundy, Flavigny-sur-Ozerain, before it became a tourist attraction. That is where she began to write seriously, starting The Whirlpool. Writing in earnest began there not just because she had time away from children but also because it was so completely different, “so other.” This sense of otherness allowed her to look back on Canada, to consider it from afar.

Jane Urquhart answered my question at a reading and discussion of her new book, Sanctuary Line, at Macdonald House in London on January 26, 2012. The morning was organized by the British Association for Canadian Studies Literature Group and the High Commission of Canada in the United Kingdom. Urquhart is in the midst of a book tour to promote this, her “most personal novel” to date. 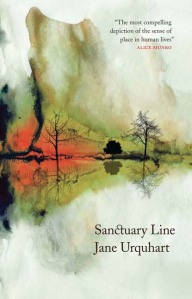 Teo is a migrant worker from Mexico, and he says the above words to the narrator, Liz Crane, who is slow to learn her love for him and is then unable to stop loving him. He is apologizing for having made up stories about his family, in imitation of her uncle, of her family stories. For me this was the saddest moment in the book. Teo adds “Maybe you cannot love me if I tell you only we are poor and my grandfather did nothing but work till he died of a cough.…” Liz sums up, “The people simply worked and then they died.” Teo’s lack of story seems at first to make him the opposite of Liz’s uncle, for whom the stories of the past are vivid and ever present. Both Teo and Liz are seasonal visitors to her uncle’s farm until an eventful day at the end of their adolescence, the day that her uncle leaves.

Liz’s uncle, Stanley Butler, is “a dynamic man, an experimenter, a risk-taker, always pulling the new into a traditional world….” He is the innovator who brings chemicals to the orchards and who arranges for the workers to come from Mexico. He wants a part of anything good, taking over the children’s interests in fossils or carving, for example. Most importantly, he is the family story-teller. His stories are of adventure, acts of nature, of the tragic consequences of a moment of inattention, and of romance. The story of the death-bed wedding, Urquhart confessed, is drawn from her own family history.

His daughter is Amanda, Liz’s cousin, and it is she who goes to the Royal Military College and thence to Afghanistan. After Mandy’s mother dies and her own mother goes to the Golden Field seniors’ residence, Liz moves into the empty house because it is close to her work – she’s an entomologist — at the Sanctuary Research Centre. But is the house a sanctuary or a cell?

At Macdonald House, in her introduction to the novel, Urquhart talked about the coming together of words that start with “m” – monarch butterflies, Mexican migrant workers and the military. To this I would add the word “mutability,” which she used later in the discussion, when talking about Liz having grown up in a world that seemed stable, despite the migrations going on around her, leaving her unable to find a way forward because this stable world has vanished. Liz’s past is mutable; as an adult, she learns things about her family that change her view not only of the past but also of what her future might have been.

Responding to a question about whether the process of research changes a novel or her view of the past, Urquhart said, “I love research. Research for me is part of the creative act.” She agreed that research can cause change — a book takes off on a new trajectory because of the research. Talking about our desire to see the past as fixed and complete, Urquhart said, “We can’t see it accurately.” The present poses its own problems: “The present is more complicated for me because I know I can’t see it as a whole.”

In other families, and in other works of fiction, such as Mavis Gallant’s The Peignitz Junction, the World Wars cause the rift between past and present. The finality of war. For the Irish family of Sanctuary Line, however, the rift is caused by time, by personal acts (or inaction) and by peacekeeping that evolves into warfare. The family peters out into this dead end, a childless woman alone in an empty house. Liz could easily become the older narrator in Away, awaiting the machines that will eat the very land her house stands on. Teo’s plain words could be applied to the Butler great-greats: the Butler family simply worked and then they died. All the rest is romantic embellishment. For Liz, their furniture in the house transforms from the storied items associated with childhood memories to “cold artefacts.” Sitting at her uncle’s desk, Liz concludes, “That’s the way it is: terminals, orchards, and dance halls, all gone now, or lost, or just indistinguishable among the clutter of everything that follows.” But all is not lost – the stories remain, thanks to Jane Urquhart. Listen to her talk with Shelagh Rogers on CBC here.